I have visited your NYC office/library in the C.G.Jung Center several times. I wondered if you have personnel who might comment on the following idea? Gary Regester

Diagram, top left: From page 244, Marija Gimbutas, The Civilization of the Goddess, Harper, ©1991 -- “An even more esoteric symbol of the womb of regeneration is the bull’s head or skull (bucranium). The similarity of the bucranium with the shape of the woman’s uterus and fallopian tubes was noticed by the artist Dorothy Cameron while working with James Mellaart (in 1960-65) at Catal Huyuk (town in Anatolia [Turkey], c. 7000 BC) . A great deal of information on the symbolic role of the bull’s head is revealed by the wall paintings from Catal Huyuk. In many, the bucranium is shown in place of the uterus in the body of the Goddess. This is a plausible if esoteric explanation for the importance of this motif in the symbolism of Old Europe, Anatolia, and the Near East.”

Photo, top center: from Encyclopædia Britannica, Inc. © 1994-2001 - “Bucranium - decorative motif representing an ox killed in religious sacrifice. The motif originated in a ceremony wherein an ox’s head was hung from the wooden beams supporting the temple roof (italics ed.-see next); this scene was later represented, in stone, on the frieze, or stone lintels, above the columns in Doric temples. The motif has been found on painted pottery in Iraq dating from 5000 BC. (Italics - Ed) It was later imported into Bronze Age Crete as part of the bull and double-ax cult, where the bull’s head was decorated with a garland of bay leaves. In Roman examples, the garland of bay leaves was omitted.”

Photo top right: from New Oxford Annotated Bible, NRSV, Oxford Press, © 1994 -John 19.16,34 “So they took Jesus: and carrying the cross by himself, he went out to what is called The Place of the Skull (Greek: craniou topos), which in Hebrew (Aramaic) is called Golgotha. There they crucified him...one of the soldiers pierced (Jesus’s) side with a spear, and at once blood and water came out."

ARAS reply- Dear Gary Regester Thank you for your letter and evocative images! I am afraid we don’t have the time to do research of this kind, however intriguing it might be. I hope you can come in and do this yourself. These are just some things I remember from our files - there is a connection in Egyptian imagery between uterus and cow horns - not bull horns, as far as I know. There is a connection between Christ’s wound and a bleeding (or at least red-colored) vulva suggesting the womb from which the Church was born. We have several images like that. All best wishes, Ami Ronnberg, Curator ARAS (Archive for Research in Archetypal Symbolism) NYC, NY

From image provided by ARAS (left) from the Bible Moralisee(c. 1250): and the caption provided by ARAS (ARAS 5Ek.010) “The sleep of Adam is the death of Christ. The side of the first man constitutes the woman, as the wound in the side of Christ on the cross signifies the Church (Ecclesia), the wife of Christ, the blood and the water of baptism. The comparison between Adam’s sleep and the death of Christ on the cross, the creation of Eve from the rib taken from Adam’s side and the birth or creation of the Church (the Lord’s Bride) from the wound in Christ’s side while He was on the cross is an old typological comparison first made by the earliest Christian theologian: Tertullian, Augustine, Jerome and Avitus. (from 5Ek.573) In Christian iconography, the wound becomes the spiritual vulva-womb from which Christ is shown literally giving birth to His Church, thereby strengthening the concept of the androgynous mature of Christ, which was suppressed by the church authorities.”

Click on photo, left, to enlarge.
Posted by Gary Regester No comments:

All Symbols are Phallus 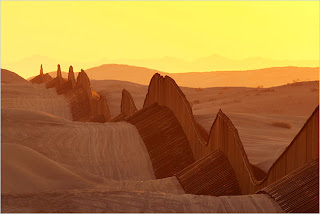 Originally posted one year ago today (and removed from the project about three weeks later). With this diatribe, there has slowly arrived the realization that Jung's archetypes are not all happy insightful symbols that bubble up in fluffy dreams and churchy icons. Rather, from the same boiling cauldron, arise a much larger dark host of death, destruction and mayhem.  Even now, there may be no return from were this path must lead.

From 5 August 2010-- In discussion yesterday with one of my house mates- topic: that the entire USA immigration issue ("give AriXona to China!") boils down to a white guy's artificial "line in the sand" aka "national border"; that all lines on the ground and the surveyors behind them are always white guy (not girl) issues and. . .and. . .lines are always phallic!; thus this is merely yet another pissing contest with endowment challenged gun and missile totting pickup truck owners. (Dont get me started on the psychic/phallic/coital implications of a 390 "horse power" "RAM" "King XL Cab" chariot.  Nor let us remember the peoples who sit just outside of memory from whom the line choppers stole the precious sand/land from in the "first" place, and "the peoples", no doubt took it from others well beyond memory.)

Then, given the long long (XL) list of symbolic phallic poles/ lines/ rulers wrapped in much less well defined (the female "point"! ofcourse) not-so ersatz vulvic banners/ earth/ crowns - starting with the supremely holy local fabric&pole combo to which my children must pledge allegiance to "under God" in Unistasia; note that the long scroll of the Torah is wrapped around two of said pole thingies; Muslim minarets in Switzerland are completely different than Christian steeples, not!; capitalized corporate acronyms and initial letters with the balance of the Name waving out behind - you see where I am going? No? So then, not to mention paying largely male players millions of u$d or equivalent to move a seed-like object down a field/ court/ campo santo through a net/ gate/ hoop/ Goal! - against another rapier thrusting team of similar persuasion, praying the same victory prayer at the other end of the campo. Nor plugging away with a long metal Scottish stick to knock a small white sphere into a hole/cup that . . .yes, true. . .already has a flag/pole/stick in it. Best of all, we can distract the great multitude absolutely "all the time" by these inane Spectacles validated solely by our genetics and genitalia - genuflection indeed.

So, question my Jungian friend - may Carl rest well - are ALL symbols themselves phallic and the wrapper is the ineffable understanding tailing out behind for which we seek and fail? Or should I ask Emma? I am tired of "pussy footing" around while idiot Rome burns.
_________________________________________
Notes on photo above: 2009 David NcNew/Getty Images - A recently constructed section of the controversial US-Mexico border fence expansion project crosses previously pristine desert sands at sunrise on March 14, 2009 between Yuma, Arizona and Calexico, California. A top Homeland Security official told a House panel that the department could ultimately respond to escalating violence of warring Mexican drug cartels by deploying military personnel and equipment to the region. 6,290 people were killed in the violence in Mexico in 2008, according to Mexican officials, and more than 1,000 in the first eight weeks of this year. Hundreds of kidnappings in Phoenix during the same time period were blamed on the drug trade. The new barrier between the US and Mexico stands 15 feet tall and sits on top of the sand so it can lifted by a machine and repositioned whenever the migrating desert dunes begin to bury it. The almost seven miles of floating fence cost about $6 million per mile to build. Zimbio March 14, 2009
________________________________________

Dr. Fabio replies-  Thanks for writing, sorry to take a minute getting back.  Hope you are well.

All conditions can be interpreted for their phallic as well as yonic content. Once you are in the realm or symbols you are hitting into the ouroborus: the whole system: everything is everything.

So there is room for interpreting everything through the phallus.  Though I would have to say that the mother supports the phallus, and that the phallus is a more recent phenomenon in the dreaming: the phallus is civilizing: it's primary role is to demarcate: even the ritual incision/circumcision: is intended to set the phallus off from the literal world of genitalia: it becomes a metaphor: this is what the father does: he turns basic instinctual drive into metaphor.  The phallus in its essence moves away from incest...

http://home.vicnet.net.au/~hwaa/hermes.html "It seems that Hermes is an ancient god of the countryside, whose name derived from the Greek word έρμα (herma) or ερμαίον (hermaion), meaning 'a heap of stones'. The function of these stone-heaps was to demarcate the land. Another form of territorial demarcation is phallic display, which is then symbolically replaced by erected stones or stakes.  To this extent, stone-heap and apotropaic phallos have always gone together."

So, my question/problem - it is one thing that, per Jung, the archetypal symbols arise and re-arise in harmless dreams and semi-harmless religious iconography. But my concern is where the arising old DNA wrap into everyday symbol creates, maybe forces, human chaos, death, murder - where we, by revealing the "obvious" symbolic blackmail, just might reduce the suffering of the blind -

examples - OK, my diatribe on the USA's demarcation "Wall"; or, so much greater, the argument re: medieval Eucharist apparently sent 100,000s to their death at the "stake". Does shouting that those symbols are not the eternity saving blood/body of nonexisting Jesus Christ, but rather the ancient ancient menstrual envy (blood sacrifices on phallic heap of stones) and certain semen/wheat symbols -  just might have made difference between life and death - fatwa where are you?

Or the differences between the Byzantium Blues' and Greens' and their chariot races in the U-shaped Hippodrome that end in the deaths of 30,000 in an afternoon - racing your pickup trucks/horses around the
"rose bowl"  - I think no one pays attention to the obvious looming symbols - as a fish is to water - this are not dream, not holy icons - just normal everyday stuff - that kills and maims.

Here are some mad responses for you, taken in good cheer:

The phallus grows in power through successful iterations of abstinence, deferral and metaphor.

But that metaphor either dies out, bone dry dessicate, or it becomes the wound is re-opened, the circumcision wounding-grounding-humbling.

The quality of the mark-- from the stone tumulus to the incision-- demarcates savage nature from: Kei-wa: literally "Shiva" -- which is understood as "civilization," "that which is held tender, dear,"-- that demarcation is at times vulnerable: though we defend it with the weight of the American military-industrial complex.  The task remains the opening of the wound: becoming vulnerable again: it's the best we can do.

Dreams are dreams: neither harmless nor harmful: they are the pharmakon to life's banality much as they seem to produce it: what matters is the degree to which we can shape the nature of dreams: not merely that dreams exist: and that we do this "shaping" with conscience.

Thus: not only the dream-- but, "I spoke the dream, and saved my soul."

"Imagine a world without borders.  No visas or passport checks. Without the fear of the 'immigrant'. A world where we really embrace cultural diversity.  How rich our lives would be." - posted on 15th March 2012 by warmpoison           Good idea or better idea?
Posted by Gary Regester 1 comment: