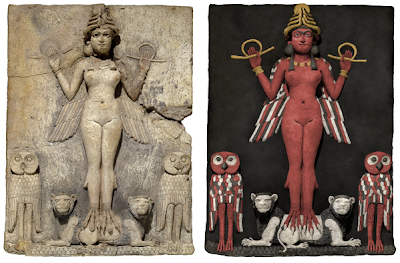 So briefly, most recall the story of Adam and Eve in the Garden of Eden, little knowing the true story of Adam's first wife, Lilith. Apparently, in a dispute over which, Adam or Lilith, should be sexually "on top", Lilith leapt into the air (with instant wings) and flew off to the Red Sea. God, making his usual rounds that evening learned the entire odd story from His new creations and dispatched two angels to sweet talk Lilith into coming back to the Garden. Unable to dissuade her, our two clever ambassadors threatened to kill her first 100 children each day to which Lilith retorted that she would birth 1000 children every day. Our two angels return to the Almighty, related the situation and the Allknowing One, after a couple more attempts (three's a charm), sorts a more compliant Eve for Adam. Not being around for the Apple / Snake shakedown, Lilith is immortal and still with us today - though needing, with feet like those, some extra daily help with gathering semen to make those 1000 babies.  She and her female offspring (ie the succubi) spend the nights causing and harvesting wet dreams 'round the world. Beats Santa Claus or maybe they. . . So, I got to be making this up? not! Robert Graves and Raphael Patai's

From the British Museum- "Queen of the Night" in old Babylon, 1800-1750 BC (southern Iraq)
This large plaque is made of baked straw-tempered clay, modelled in high relief. The figure of the curvaceous naked woman was originally painted red. She wears the horned headdress characteristic of a Mesopotamian deity and holds a rod and ring of justice, symbols of her divinity. Her long multi-coloured wings hang downwards, indicating that she is a goddess of the Underworld. Her legs end in the talons of a bird of prey, similar to those of the two owls that flank her. The background was originally painted black, suggesting that she was associated with the night. She stands on the backs of two lions, and a scale pattern indicates mountains. The figure could be an aspect of the goddess Ishtar, Mesopotamian goddess of sexual love and war, or Ishtar's sister and rival, the goddess Ereshkigal who ruled over the Underworld, or the demoness Lilitu, known in the Bible as Lilith. The plaque probably stood in a shrine. The same goddess appears on small, crude, mould-made plaques from Babylonia from about 1850 to 1750 BC. Thermoluminescence tests confirm that the 'Queen of the Night' relief was made between 1765 and 45 BC.

The relief may have come to England as early as 1924, and was brought to the British Museum in 1933 for scientific testing. It has been known since its publication in 1936 in the Illustrated London News as the Burney Relief, after its owner at that time. Until 2003 it has been in private hands. The Director and Trustees of the British Museum decided to make this spectacular terracotta plaque the principal acquisition for the British Museum's 250th anniversary.

Photo above: The plaque as it looks now compared to a reconstruction image created by Mark Timson of the British Museum's New Media Unit, with the guidance of Dominique Collon, curator in the Department of the Ancient Near East.