Kreider on 'Marketable Truth' and 'I Dont Know'

This is another reason so many writers feel the need to impersonate someone wise or in possession of some marketable truth: it’s a function of insecurity, of fear. If we don’t assume some sort of expertise, why, exactly, should anyone bother reading us, let alone buy our books or invite us to appear on “Fresh Air”?  To admit to ignorance, uncertainty or ambivalence is to cede your place on the masthead, your slot on the program, and allow all the coveted eyeballs to turn instead to the next hack who’s more than happy to sell them all the answers.

My least favorite parts of my own writing, the ones that make me cringe to reread, are the parts where I catch myself trying to smush the unwieldy mess of real life into some neatly-shaped conclusion, the sort of thesis statement you were obliged to tack on to essays in high school or the Joycean epiphanies that are de rigueur in apprentice fiction — whenever, in other words, I try to sound like I know what I’m talking about. Real life, in my experience, is not rife with epiphanies, let alone lessons; what little we learn tends to come exactly too late, gets contradicted by the next blunder, or is immediately forgotten and has to be learned all over again. More and more, the only things that seem to me worth writing about are the ones I don’t understand. Sometimes the most honest and helpful thing a writer can do is to acknowledge that some problems are insoluble, that life is hard and there aren’t going to be any answers, that he’s just as screwed-up and clueless as the rest of us. Or I don’t know, maybe it’s just me. Read the entire The Power of ‘I Don’t Know’ By TIM KREIDER, "Draft" NY Times, April 29, 2013  Illustration: Jim Stoten 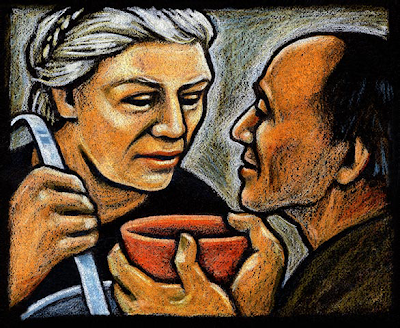 Easter Sunday was our annual and ancient discussion of how to kill and eat the Divine God - with its associated and copyrighted nuances by various parties, as example, the punishments regarding the belief, or lack thereof, in the johnny-come-lately miracle of transubstantiation - wiki it - much better than the miracle of refrigeration.

Here follows a rarely actioned suggestion from the gospel of Matthew about how to remember and honor the Divine God. We should add that no human has yet to be punished, killed or roasted because of his/her belief or non-belief in this pericope - not yet anyway, read on.

And, if what Matthew writes just proves to be the case, then the soup kitchen might be at the cutting edge of the true 'do unto Me' Eucharist. And our own Dorothy Day will be the great soup kitchen Saint- wiki again.  Her optimistically named organisation - Catholic Workers - follows in her dedication. However, note below, if you do not care to slave over a hot stove in a soup kitchen (or similar tasks) on this side of the veil, you still get to go to a very hot place as part of the 'deal' later on. (Illustration of Dorothy Day, above, by Julie Lonneman, used with permission of the artist.)