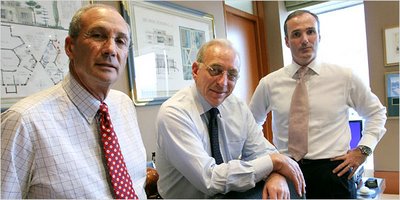 From Leonard Shlain, 1999- "The starched shirt collar with a tie hanging down between its two pointed tabs-an abstract representation of male genitalia-has long been a symbol of patriarchal dominance."

However, take a second look at the dangling phallus from between the two pointed tabs - what we CANNOT see hidden behind the white starched shirt collar is the yonic "loop" around the neck - if we could see the loop, then the necktie closely resembles our coital (or androgynous) "ankh", our "vessel atop a post". Or taken as a whole - "starched shirt collar WITH a tie" - our modern version of the priestly "alb and stole" - we definitely have our "ankh". Then, if we were to add Norman O. Brown's comments from Love's Body,1966, that the "head is phallus", then our neck-tie wearing corporate raiders above began to resemble three side-by-side ancient "phi" "power-on" symbols. (Don't yet "see" this - review earlier "posts" with boots.)

What then does the woman's purse signify? Sidewalk sex workers seem always (USA) accessorized with stilettos heels (vessel w/post) and purse (signifying?) - sacred to mundane - why?

Am looking for the photo credit of the corporate raiders pictured above from the New York Times - one moment please.
Posted by Gary Regester at 22:11

Female reindeer head [c. 12,000 bce], first from left above: from S. Giedion -"Rites associated with the [interment of the] skull [Ed: 30,000 to 10,000 bce - Mousterian to Magdalenian periods]. . .need to be distinguished from rites involving sacred poles or posts, sometime, but not always, surmounted by an animal's head. Such post were made of wood or of stone and became, in some sense, centers of power.

"From the bird on a pole in the cavern of Lascaux, which is being clutched at by a bird-headed man, the tradition of the bird-crowned staff or pole extends until the time of the Lombards in sixth-century Italy and until quite recently anong some primitive peoples [Ed: and well beyond! - to the scepters of modern royalty - ie, doves - and USA/other flag poles - ie, eagles, double eagles].

"An example [drawing, left above] from the northern Magdalenian period (around 8000 bce) was discovered by Alfred Rust in a pond (now meadowland) from the end of the last glaciation at Ahrensburg-Stellmoor, not far from Hamburg. He found there an undisturbed wooden post (2.12 m) still topped with the skull of an aged female reindeer (Ur-Schweiz (Basel), XII, 1948, pp. 68-71).

"Survivals of the cult of the sacred pole persisited until recent years among the Ainus in northern Japan, where the shaman continued to play an important role. Posts with animal skulls, called inao, sometimes clustered almost like a hedge, crossroads--in short, in all places associated with divine beings" (Murdock, 1952, pp. 187-88). Murdock considered that 'that inao are neither gods nor offerings.'

"The final development of the sacred post appears in Egypt, in the obelisk, whose peak was thought to be the resting place of the sun-god Ra. [Ed: ie, golden orb; as, tops of most American flag poles]

"The cult of the sacred post makes it even clearer that both the cult of the skull AND the ritualistic animal intermints [in caves] were closely related to the procreation of the [human] species."

As an individual who has traveled far and wide, what does it say to you that such Boots Atop Posts seem to be prevalent in the US of A only? In the country where I live, we have beer cans atop posts, Cola bottles on posts, and sheep skulls atop posts? Is there - in your opinion - a difference in the symbology of the whole concept - depending on using a boot or a skull - or does it all signify the same?

Greetings, Dimitri [source of photo, second from left above]

All signifies the same, but as to sheep skulls vs Cola bottles? have you photos of sheep's heads? Compare Freud's Boots with Gimbutas' Skulls - was denken du?

Bulls' Heads on Post [c. 1995 ce], India, third from left above: from Vidya Dehejia, DEVI - "A sacrificial pole erected for a buffalo sacrifice in a Maliah Kondh village. After the sacrifice the Maliah Kondh place the buffalo head on top of the pole like a trophy. India, state of Orissa, Phulbani district, Balliguda area, spring 1995." Note: "like a trophy"; compare with earlier "trophy" posts.

Cowboot boots, sheep heads, tires, Coke bottles and other "skulls" placed atop posts; national flags, golden orbs and Christs'/Adonis' hung on poles and trees - all the same symbol? What is being symbolized?
Posted by Gary Regester at 19:59

Be afraid! ?? Notes from Antarctica 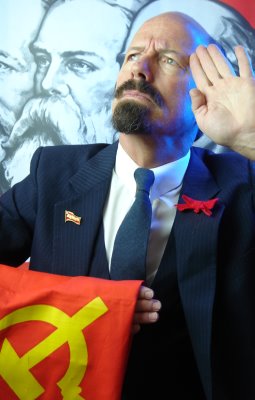 "Society 'treats Christianity like a second-class superstition,' Tom DeLay, then a Republican representative from Texas, told the crowd. 'Seen from that perspective, of course there is a war on religion.'" -from the first of a four part series in the Times entitled "IN GOD'S NAME - Favors for the Faithful" which examines "how American religious organizations benefit from an increasingly accommodating government."

"Second-class superstition"? (Hmmm?, a "first-class superstition" would be?) Mr. DeLay, you honor your Christians by several "classes" up from reality. Mr. DeLay should take five minutes out of his busy schedule, find a history book and learn about Adonis, Attis, Osiris - their virgin births and deaths on/as trees and nearly 32 other "super hero" stories that came BEFORE DeLay's annointed Christ mythos. But aside from his concerns about a "second-class superstition"-

by reading and living his own Book, Mr. DeLay could improve the situation of Christian believers and the "war" against them. Without mentioning the obvious for Mr. DeLay - "thou shalt not steal" or "thou shalt not bear false witness" - here is my esoteric choice of six passages from the Christians' Bible which Christians should probably take a second look or, truth told, a first look.

1) for the door knockers, the helpers of the Almighty - Romans 1.19-20: "For what can be known about God is plain to them, because God has shown it to them. Ever since the creation of the world, His eternal power and divine nature, invisible though they are, have been understood and seen through the things He has made. So they (we, the ungodly) are without excuse." Again, for emphasis- Who shows we, the godless, about God? not our fellow worm bait - but it was, for your short moment, so reassuring to be the happy little helper of the great Eternal One.

2) for the Lord's Day folk and Blue Laws - again, Romans - 14.5: "Some judge one day to be better than another, while others judge all days to be alike. Let all be fully convinced in their own minds." Oh, and, by the way, no judging of each others' judgements - entire chapter, Romans 14 - takes all the fun out it.

4) two (three) sets of "Ten" Commandments- the one you know, Exodus 20.2-17, with condensed version, Deut.5.6-21 and then the second set you do not know, after Moses broke up the first set, Exodus 34.1-27. Compare all three. Note on Ex. 34: firstborn humans are to be "redeemed" just the same as the first "womb openers" from sheep and cows - "Father, where is my brother?"  Some scholars refer to this second writing as the "Ritual Decalogue. Wiki discussion here.

5) from an earlier post on the "Ten" or however many Commandments that the right winging USA so-called "christians" want posted in every courthouse and government building (who exactly are the Taliban?!) - The Hebrew prophet Jeremiah (Jer. 31.31ff, cf: Heb. 8.6-13) stated that "the days will come that (the Lord) will make a NEW COVENANT, not according to the covenant...made with their Fathers...out of Egypt [that would the be TEN stone ones], but a covenant (He) will...write in their hearts." Well, this has not happened yet - in 2900 years.

This echoed by the apostle Paul (2 Corinthians 3.6,2 NRSV) that "God has made us competent to be ministers of a NEW COVENANT - written not with ink, but with the Spirit of the living God, not on tables of stone, but on tablets of human hearts - for the letter kills, but the Spirit gives life." Still, no action yet - 1960 years later - folks are still "stone" bound.

6) my great favorite - "God with Breasts" - El Shaddai - I promised some esoterica - “By the Almighty [El Shaddai] who will bless you with blessings of heaven above, blessings of the deep that lies beneath, blessings of the breasts [shadayim] and of the womb [racham] ” -Genesis. 49:25, see also Genesis 28:3; 35:11.

From Joseph Winthuis, 1928- pg. 12 "To the primitive, all straight lines signify the membrum virile - the phallus; whatever is circular or sickle-shaped is the membrum muliebre- the vagina. However unlikely this statement may appear, it is our only way of gaining insight into primitive thought."

This aint pretty - it's becoming an ancient/modern möbius strip of 0's and 1's - this rabbit hole will stay "under construction" - please come back for continuing details of the "boot atop post" icons above and in the previous post.

credit above: Joseph Winthuis, "Das Zweigeschlechterwesen bei den Zentralaustraliern und anderen Volkern" Hirschfeld, Leipzig, 1928 - " a fieldwork in Central Australia; an attempt to prove that the theory of the dual sex being is the main spring of life & expression of physical relationship between male & female; sex relationship & its significance expressed in art; objects (sacred & secular); sagas, cults, songs and ceremonies."

(How polite! - how nice the language of our Australian and German cousins. But in light of the Colorado "cowboy boot on the upright G-d d-mn f-cking fence posts" - no quaint "primitive thought" BS need apply! These f-cking so-called "primitive" symbols extrude today - everywhere - 1011101010101011100!! - did we also mention the popularity of the Base "10" system?)

Regarding the petroglyphs "i", "j", "k" and "l" above - following from their intermediate source (page 234), in S. Giedion's Eternal Present, the Beginnings of Art, 1962, page 230 : "It is astonishing that the innumerable ideograms of eastern Spanish art - those last notes of prehistory from the iron and bronze ages - are still deprived of any precise interpretation, as are also those similar northern symbols, related to them in type and time, from [Clonfinlough,] Ireland [previous post] and the high western Alps. But the expression of male and female qualities has been definitely brought out in a number of different figurations. What, for instance, is the meaning of the strongly definely circular form crossed by a vertical line which comes so close to the form of the Greek letter phi? Is it really only an abstract human figure? Can it not just as well be an androgynous symbol (read: "coitial" here, ye boots/posts folks]? Other signs point to the possibility of this as the highest fertility symbol: generator of life, with life endowed." citation: S. Giedion, Eternal Present, Pantheon Books, Random House, NYC, 1962