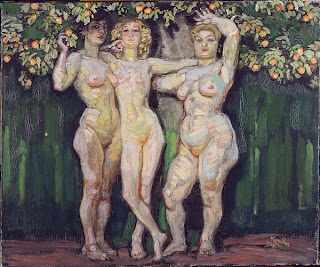 NEW: Kupka moves from Museo Miro to Museo Picasso Málaga. The exhibition will show for the [second!] time in Spain a selection of around 80 paintings and drawings by the Czech artist, all from the Centre Georges Pompidou, and documents from the collection of Pierre Brullé, a leading expert on Kupka, who was considered the first painter to explore the concept of abstract act. The splendid collection of works from the Centre Georges Pompidou, mostly donated by the artist's widow in 1963, shows very clearly the development of Kupka's art from his early Symbolist paintings to his final years. František Kupka (1871-1957) began his artistic career at the Academy of Fine Arts in Prague, where he learned an academic style. Later on, in Vienna, he began to take an interest in Symbolism and allegorical art. After moving to Paris in 1896, Kupka worked as a press and advertising illustrator while at the same time making contact with the early avant-garde movements such as Fauvism and Cubism, though maintaining his independence and his own personal language. His interest in Futurist writings meant that around 1910 his work started to become increasingly abstract, with the idea of reflecting movement and studying the effects of colour and the relationship between music and painting. This led to the publication of the book La Création dans les arts plastiques in 1913. Despite his links to the "isms" of the period, Kupka always felt himself to be a lone experimenter. In 1931, together with Auguste Herbin, Jean Hélion and other artists he founded the Abstraction-Création group, which defended abstract art against the Surrealist movement led by André Breton. 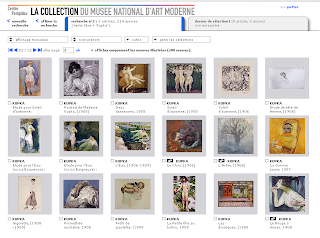 The František Kupka exhibition at the Foundation seeks to highlight the artist's particular contributions, such as the combination of Austrian fin-de-siècle motifs with the early avant-garde exploration of form and the depiction of movement, which very soon led him to abstraction. This sensibility means that Kupka's work occupies a leading place in the history of modern European art.  Major exhibitions of Kupka's art have been held in the main museums in France the United States and Japan, but he has never had a retrospective in Barcelona. It is in order to redress this unjustified omission that the Foundation is now presenting this show that will enable us to appreciate and understand the stylistic evolution and working methods of this key painter in the development of early abstract art.

Notes: Links to the entire Kupka collection of Centre Pompidou as photo above right, enter there, "kupka", into box at left. Early exhibition on the La Fundació Joan Miró site page . The second largest collection of František Kupka is located in his native country, the beautiful Museum Kampa, Prague, however images of his work on this site seem to be lacking.
Posted by Gary Regester 1 comment: