from the Wiki Teacher-
"For I do not do the good I want ..." -Romans 7:19
"Whoever knows the right thing to do and fails to do it, for him it is sin." -James 4:17
"He who has the ability to act on an injustice, but who stands idly by, is just as guilty as he who holds the knife." -Dracano Sapien
"In the end we will not remember the words of our enemies, but the silence of our friends" -Martin Luther King
Posted by Gary Regester No comments: 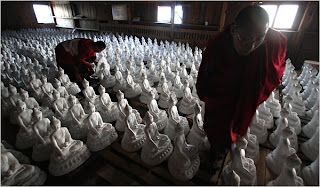 Mike Albans for The New York Times
Gochen Tulku Sang-ngag Rinpoche, left, and Khenpo Namchak checking on the quality of the completed castings of Buddhas.

October 31, 2010 New York Times
On an Indian Reservation, a Garden of Buddhas
By JIM ROBBINS
ARLEE, Mont. — On a rural American Indian reservation here, amid grazing horses and cattle, a Buddhist lama from the other side of the world is nearing completion of a $1.6 million meditative garden that he hopes will draw spiritual pilgrims.

“There is something pure and powerful about this landscape,” said Gochen Tulku Sang-ngag Rinpoche, the 56-year-old Tibetan lama, as he walked down a gravel road on a sunny fall day. “The shape of the hills is like a lotus petal blossoming.”

Richard Gere has not been seen house shopping here — yet. But on the land of the Confederated Salish and Kootenai tribes, a 24-foot statue of Yum Chenmo, the Great Wisdom Mother, has risen in Mr. Sang-ngag’s farm field. Nearby, in his old sheep barn, amid rubber molds and plaster, some 650 statues of Buddha sit in neat rows, illuminated by shafts of light pouring in through broken boards.

It seemed the perfect setup for a clash of two cultures when Mr. Sang-ngag, a high-ranking Buddhist lama, came to this remote part of Montana a decade ago, liked the landscape feng shui and bought a 60-acre sheep ranch. At the foot of the towering, glacier-etched Mission Mountains — not unlike his native Tibet — he and a band of volunteers began building a Garden of 1,000 Buddhas to promote world peace.

The arrival of the exotic culture here in cowboy country, with multicolored prayer flags flapping in the breeze, made some from the Salish and Kootenai tribes uneasy, to say the least.

An unusual land ownership pattern was partly to blame. While most Indian reservations are majority-owned by the tribes, a 1904 law allowed nonmembers of the tribes to homestead land. And as a result, there are four to five times as many non-Indians on the reservation as there are Indians.

Mr. Sang-ngag called his place Ewam Sang-ngag Ling, or the Land of Secret Mantra, Wisdom and Compassion. It turns out that it was sacred to the tribes as well, a place where, oral traditions hold, a coyote vanquished a monster and drove out many bad spirits so the people could live here.

Julie Cajune, the executive director for American Indian Policy at Salish Kootenai College and other Indians began working to build bridges between the tribes and the Buddhists. They suggested that the Buddhists bring traditional gifts, prayer scarves and tobacco, to the tribal council, which they did.

“Many people move here without recognition they are a guest,” Ms. Cajune said. “None of the mainstream churches or the Amish have done that.”

Buddhists in Japan, Taiwan and China have sent money for Buddha statues. The Dalai Lama has agreed to come and consecrate the Garden of 1,000 Buddhas after the project it is finished, perhaps in 2012.

But the patchwork of Indian and non-Indian land holdings within the reservation remains contentious. Some tribal members are worried that groups drawn to the Buddhist garden will buy up nontribal land, driving prices further out of the reach of Indians, and ignore tribal rules and customs.

They point to the case of Amish families who have bought farmland within the reservation, said Ms. Cajune, who is Salish.

“It’s ironic, but many Indian people can’t afford to buy land on their own reservation,” she said. A typical acre for building a home here might cost $30,000 — an enormous amount in rural and tribal Montana.

But Ms. Cajune said there was also an uncanny kinship between the tribal and Buddhist cultures, based on understandings of sacred landscapes, and even notions of honor and respect.

The biggest driver of rapprochement here is a shared history of subjugation and displacement — for the Tibetans, at the hands of the Chinese (Mr. Sang-ngag spent nine years in a Chinese labor camp) and for the tribes, by the American government.

“There is a shared vision of cultures being under pressure and surviving,” Mr. Sang-ngag said through a translator.

The heart of the 60-acre development is the 10-acre Garden of 1,000 Buddhas. When tribal elders came and blessed it, the two groups found they both used juniper and sage as purifying incense for ceremonies, for example, as well as similar prayer cloths and ritual drumming.

After much outreach by the Buddhists, including asking permission from the tribe to have the Dalai Lama consecrate the ground, Ms. Cajune said, “I think local people are feeling more comfortable.”

The sheep are gone from the green hills here now. “They achieved Buddhahood,” joked Mr. Sang-ngag, as he walked through the garden, designed in the shape of the dharma wheel, which symbolizes the core teachings of Buddhism. The Great Wisdom Mother statue contains sacred vases and holy texts. Swords, guns and other symbols of war are buried underneath, to symbolize a triumph over violence.

In the Buddha barn, meanwhile, is a Norton motorcycle, which members here jokingly refer to as the sacred chopper. It will be raffled to raise money to finish the garden. About half the money has been raised.

Last week the Buddhists began planning with the tribal officials about managing pilgrimages to the site, a possible headache for the tribe. “Some people want to keep the reservation a good, quiet secret,” Ms. Cajune said.

But Mr. Sang-ngag says good karma, or spiritual energy, is ebbing from the earth, and the garden will help enhance it. “It’s designed to awaken the Buddha nature” of wisdom and compassion in anyone who gazes upon it, said Lama Tsomo, a student who lives nearby.