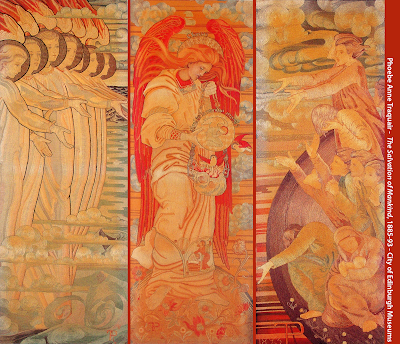 From Mela Muter's lovely "Art Incunnu" efforts- "Phoebe Anna Traquair was an Irish artist who rose to prominence in Edinburgh and went on to produce a staggering volume of work. She was part of the Arts and Crafts movements in Scotland and worked in a number of disciplines including embroidery, jewellery making and metal work, painting, illustration and book design. She painted vast murals in several buildings including the Catholic Apostolic Church and the chapel of the Royal Hospital for Sick Children, both in Edinburgh. Notably, she illuminated the book "Sonnets from the Portuguese" by the poet Elizabeth Barrett Browning, but she is probably best known today for her exquisite embroidered panels and drapes, one of the most spectacular of which "Salvation of Mankind" (left) in City Centre Gallery, Edinburgh. Traquair is a unique figure in both British Art and the Arts and Crafts movement, and she has been identified as the first significant professional woman artist in modern Scotland." Read and see more. . .
Click on images to enlarge.

From Elizabeth Cumming's 2005 book on Traquair, page 47 "This keenness for perfection also reflected in [Phoebe Traquair's] reading of Walter Pater. . .that 'not the fruit of experience, but experience itself, is the end'." 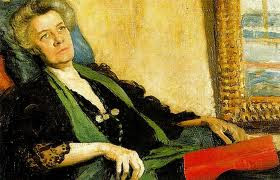 Tucked in time between the works of the social anthropologist Sir James George Frazer and the psychiatrist Carl Jung, indeed a bridge, are the writings of the classicist, Jane Ellen Harrison (1850-1928), especially her opus - Themis (1912, 1927) - her study of the earliest forms of Greek religion.

Themis not only had great influence on the continued studies of the origins of religion, even to present, but also on contemporary arts and artists including the American abstract expressionist, Clyfford Still.  (See review of Still's current exhibition including Harrison's book, Themis - FD: I am collection photographer at CSM, Denver, where I learned of Harrison's work.)

Nine years after writing Themis, and at the age of seventy-one, Jane Harrison set down the essence of her thoughts in the short sequel to Themis, entitled Epilegomena (1921), an excerpt from the conclusion of the first of its three chapters follows below.  Just her Epilegomena answers great (yes, huge!) questions.  Download both Epilegomena and Themis at archive.org  Harrison portrait (portion) above by Augustus John.

"Still more strange is it to find the ritual mould surviving even in the plays of Shakespeare. The Hamlet-saga like the Orestes- saga has behind it the ancient and world-wide battle of Summer and Winter, of the Old King and the New, of Life and Death, of Fertility and Barrenness; behind the tragic fooling, as behind the Old King Oedipus is the figure of the Scapegoat, the whole tragic katharsis rests on the expulsion of evil in the ritual of the spring - Renouveau. The examination of the elder Eddic poems shows that the theory of their origin in primitive ritual drama correlates a number of facts which else appear meaningless and unrelated. Finally, and perhaps most strangely of all, it has recently been shown that the legend of the Holy Grail has a like ritual foundation. In the Grail literature "we possess a unique example of the restatement of an ancient and august Ritual in terms of imperishable Romance."

"The question of the influence of folk-plays and fertility dramas on various forms of literature has now long passed beyond the region of conjecture. It is firmly based on fact and widely accepted. It would be a delight to follow it into further fields, but the task before us now is quite other. We have to note not the evolution of literature but the primitive beginnings of theology, to mark how the god rose out of the rite.

"The ritual dance then is dead, but its ghost still lives on in Seville Cathedral and wakes to a feeble fluttering life three times a year. At the Festival of Corpus Christi, during the Octave of the Immaculate Conception and during the three days of Carnival (when I had the good fortune to see it) the ritual dance is danced in the Holy of Holies behind the great gold grille immediately in front of the High Altar. It is danced by the so-called Seises or groups of choristers. Their number has now dwindled to two groups of five.

"This dance of the Seises [ed: the Six or Sixteen] has been to the Church the cause of no small embarrassment and she has frequently but so far vainly sought to abolish it. She admits that its origin is "perdu dans la nuit des temps." It is frankly pagan and we can scarcely avoid the conjecture that it took its origin in the dances of the Kouretes in Crete in honour of the Mother and the Son. At Carnival, when I saw it, the dance took place after, Vespers. The song with which the dance was accompanied was a prayer to the Sun, but it was to the setting, not as with the Kouretes, the rising Sun. It was a prayer for light and healing. The dance is now attenuated to a single formal step. It is decorous, even prim in character. But the fading light, the wondrous setting, above all, the harsh plangent Spanish voices of the boy singers are strangely moving. It is a sight once seen never forgotten. Great Pan is dead, but his ghost still dances."