Why are the boots on fence posts? Answer: 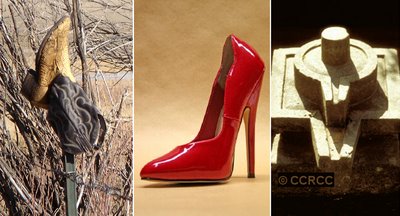 We are considering symbols winding in and out of the sacred and mundane. What motivates the rancher to place boots on fence posts? Do you see any similarity between the boots atop the posts and two images that follow? - the shoe-WITH-a-post stiletto and the yonilingam - Shiva's "post" and Pavarti's "shoe"?

Perhaps some background is helpful - Freud suggests that the shoe is the symbol of female genitalia ("Symbolism in Dreams", in Complete Psychological Works of Sigmund Freud, Tr. and Ed. James Strachey, Hogarth Press, London 1963, vol.XV, p.158 ). And that the foot is a penis substitute (Freud, "Symbolism in Dreams", in op.cit., pp.155-6). So, does the rancher, consciously or unconsciously, create a coital symbol - vagina atop penis - down miles of country lanes?

But to my growing right-wing Protestant "family", physicians that went on to become psychiatrists were Anathema, little better than the Devil Incarnate. Very well.  Let's turn to 3000 year old Holy Writ - where the feet, legs and thighs are also used as equivalent phallic "euphemisms" to avoid mentioning the extra frightening name of the male reproductive organ itself (just as the Hebrews avoided the name of their monodeity) - as example - after Moses received his divine commission at the Burning Bush to go before the Pharaoh seeking the release the Hebrews, the same all-knowing "Lord" tries to kill Moses because he turns out to be uncircumcised (Ex. 4.24ff). But his quick thinking wife, Zipporah, cuts off the foreskin of her son and touches Mose's "feet" with the bloody foreskin, saying "Truly you are a bridegroom of blood by circumcision to me!" So the Lord spares Moses' life. Commentary says (NRSV 3rd ed), "'Feet', a euphemism for the genitals (see Isa 7.20)". (Never heard this story, I'll bet.)

OK, Isaiah 7.20 reads "On that day the Lord will shave. . .the head and the hair of the feet, and will take off the beard as well" refering to shaming of prisoners. Shave the "hair of the feet"? Or Jacob (Israel) tells son, Joseph, to make an oath by putting "your hand under my thigh and promise to deal loyally and truly with me" (Genesis 47.29). Similar "euphemisms" are used in Greek myths of a birth-giving male Gods, such as Kumarbi begats the the West Wind from his "thigh" or Zeus who gives birth to Dionysus from his "thigh" / aka penis.

The words, "testament" and "testify" come from the same root meaning as "testicle" - that is, one made an oath by placing your hand over something more precious than your mother's grave! From the knee (penis??) or "genu" comes "genuflect" - to bend the knee in worship. YHWH's covenant with Abraham, father of the Hebrews and Arabs, needed something more than a flexible penis, it required an oath signed with the blood of circumcision (Gen. 17.9-14) - 99 year old Abraham, his 13 year old son, Ishmael and all his male slaves were so "covenanted" on the same day. (Menstrual envy is here suspected by some scholars.)

So, if foot = penis, then boot = vagina. Atop a country fence post?

Still not convinced? Freud and Holy Writ not enough? On the back cover of Barbara Walker's book "The Woman's Encyclopedia of Myths and Secrets" isbn 006250925x, she asks "Why was Cinderella's glass slipper so important to the Prince?" Her answer, pg 168- "Beautified with her new riches, Cinderella won the Prince . . . Their union was symbolized by fitting her foot into a shoe, a common sexual allegory." Need more? From Robert Graves, "Greek Myths: 1" paper isbn 0140010262, pg 94 "Demeter's ecstatic initiates [celebrating the Eleusinian ('advent') Mysteries - 1500bce to 396ad] symbolically consummated Demeter's love afair with Zeus in an inner recess of the shrine by working a phallic object up and down a woman's top-boot;" this being "the temple of she who rages in a lurking place." Yet more? Charles Panati's Extraordinary Origins of Everyday Things, Harper 1987, isbn 0060960930, pgs 26,27 "Today old shoes are tied to newlyweds' car and no one asks why. Originally, shoes were only one of many objects tossed at a bride to wish her a bounty of children. In fact, shoes were prefered over the equally traditional rice and wheat because from ancient times the foot was a powerfully phallic symbol [Ed: Panati fails to state the obvious converse - that the shoe was therefore a powerful vulvic symbol]. In several cultures, particularly among the Eskimos, a woman experiencing difficulty in conceiving was instructed to carry a piece of an old shoe with her at all times."

I’ve enjoyed your photographs on this and other pages as well as most of your scribblings here and there on the Web. However, I must take issue with what you’ve written here about Sigmund. It’s all very well when you exactly cite his works and it makes what you say look convincing - almost scientific - but you seriously err when you write “Freud has shown that the shoe is the symbol of the female genital and that the foot is a penis substitute”.

What I’m trying to say is that he has not shown it, he merely posited this and other weird ideas in his tomes. Well, it has not convinced me nor a great number of others. That the world at large seems to believe him is the real problem here.

It is well documented that Uncle Sigmund found it very difficult to related to women, had a depressing sex-life and was “secretly” in love with another man. Last not least, he certainly took more cocaine than is reasonable. And we should believe and follow - in our minds - the scribblings of such a cocaine-infested brain.

I’m sorry if I disillusioned you. I do like high heels as well, but they remain high heels and are meant to make a woman look taller and to make her curves more visible. I also like feet in such high heels, but they should be the feet of the Lady wearing them … not someone’s dick.
Please think about that.

Well said. Not to worry. My theorem will not rest long atop Uncle Sigmund, nor his cigar, his "foot", posits or pen.

In case you would like to see another example: http://johnrrogers.com/texas/boots-on-fence/