(Remember our Boots Atop Posts explaination??)
Posted by Gary Regester No comments: 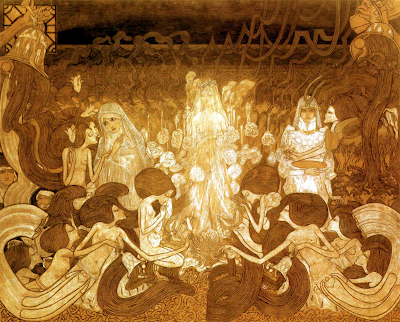 "In a letter to a friend, Toorop explained that he wanted to bring together the sentiments and ideas of ‘All-nature' in one grand form. The Brides are stylized expressions of the different mysteries in the shape of a human being. In this drawing Toorop, not for the first time, took up the old theme of Good versus Evil, in the form of asceticism versus lust, both in the figure of a woman. The young and naïve Bride, flanked by - in Toorop's words – 'the suffering of the soul which leads to the highest-purest, the mystical love” on the one hand – you can see this also in the bells at the topsides of the drawing, being held by the hands of Christ – and on the other side “the unquenchable thirst for deeply sensual and material longings', symbolized by the Bride who holds a cup which catches the blood that comes from a large urn. The urn is carried by the hands of women whose heads and bodies are being repressed by the Bride's other hand. They represent, in Toorop's meaning, 'the weak to eternal matter doomed world.'"

from a lecture by Francisca van Vloten, in the series related to the exhibition Masterpieces from European Artist Colonies 1830-1930 (Febr. 6 until May 22, 2005), Oglethorpe University Museum of Art, Atlanta GA, on April 19, 2005

"It is so beautiful outside of color, color, color and sun … One gets intoxicated. The quiet is beyond words here. Your inner beauty keeps you so occupied, and outside the sun is contending with all the autumn colors …"

These words. . .were written by the Dutch artist Jan Toorop (1858-1928) in the autumn of 1908. They were meant for his friend and colleague Kees Spoor in Amsterdam and referred to the small seaside resort of Domburg on the former island of Walcheren, in the Dutch province of Zealand.
Posted by Gary Regester 1 comment: