Dr. Leonard Shlain, surgeon/author of, among others, the book Alphabet Vs the Goddess, unfortunately passed away in May.  For me, a left-handed, dyslexic, ex-divinity student cum image maker, Alphabet Vs the Goddess proved my most influential book in the last ten years - the title itself sent shivers up my spine when spied thirty yards away in Denver's Tattered Cover bookstore - even before I got to wading through its erudite contents.  It's the sort of book where you immediately buy a half dozen to gift to your last five best friends - missionary to the saints. Dr. Shlain also proved a kind and patient correspondent during my continuing novitiate. I have just learned of his several recorded lectures, here is one - entitled "The Big O" - enjoy the next hour:

William Blake at Morgan NYC: "A New Heaven Is Begun" 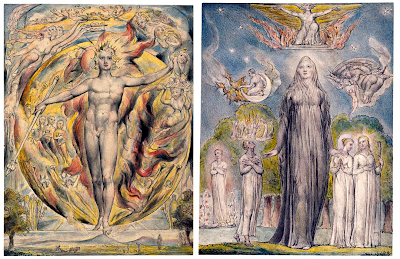 from the Morgan Library site- Visionary and nonconformist William Blake (1757–1827) is a singular figure in the history of Western art and literature: a poet, painter, and printmaker. Ambitiously creative, Blake had an abiding interest in theology and philosophy, which, during the age of revolution, inspired thoroughly original and personal investigations into the state of man and his soul. In his lifetime Blake was best known as an engraver; he was later recognized for his innovations across many other disciplines.

See Online Exhibition In the Morgan's first exhibition devoted to Blake in two decades, former director Charles Ryskamp and curators Anna Lou Ashby and Cara Denison have assembled many of Blake's most spectacular watercolors, prints, and illuminated books of poetry to dramatically underscore his genius and enduring influence. William Blake's World: "A New Heaven Is Begun"—the subtitle a quote from Blake referring to the significance of his date of birth—is on view from September 11, 2009, to January 3, 2010.

The show includes more than 100 works and among the many highlights are two major series of watercolors, rarely displayed in their entirety. The twenty-one watercolors for Blake's seminal illustrations for the Book of Job—considered one of his greatest works and revealing his personal engagement with biblical texts—were created about 1805–10. Also on view are twelve drawings illustrating John Milton's poems L'Allegro and Il Penseroso, executed about 1816–20. Both series were undertaken for Blake's principal patron, Thomas Butts. Also see University of North Carolina's Blake Archive
Posted by Gary Regester No comments:

TORONTO, Canada (Reuters) July 8 2003 -- Stonehenge is a massive female fertility symbol, according to Canadian researchers who think they have finally solved the mystery of the ancient monument in southern England. In the arrangement of the stones, the researchers say they have spotted the original design: female genitalia. The theory is laid out in a paper entitled "Stonehenge: a view from medicine" in an issue of Britain's Journal of the Royal Society of Medicine. "To the builders of the henge, the most critical events in life were birth and death," Anthony Perks, a retired professor of obstetrics and gynecology at the University of British Columbia, wrote in the paper, published earlier this year. He noted there was no evidence of tombs built by the original builders. "Of birth, we could expect little evidence. However, evidence may be there but so large as to be overlooked."  National Geographic image above by Joe McNally/Sygma
Posted by Gary Regester 7 comments: