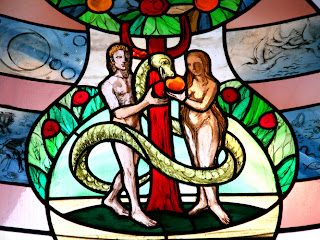 are featured in today's Terry Gross's Fresh Air on NPR. She "suggests that the Bible shouldn't be used as a guidebook for marriage or sexuality because passages related to sex — on topics related to monogamy, polygamy, sexual practices, homosexuality and gender roles — are more complex and nuanced than popular culture has led us to believe."  We agree. The "literalists" should first read their own book before pronouncing a defense of "Christian marriage" for all their neighbors - see our 2006 post.
On celibacy- "There's a fantastic passage in Matthew where Jesus says to his disciples that some people should be eunuchs for the kingdom of heaven. So the way this gets received by early Christians is that Jesus is recommending celibacy which would make sense, given that he says elsewhere that we shouldn't get married, that we should be focusing our attention on spreading the gospel. So the idea [of] 'be a eunich' for the kingdom of heaven makes sense. However, interestingly enough, some Christians took this literally and there were some cases of early Christians castrating themselves for the purpose of celibacy. So that's a pretty radical statement that the best kind of Christian is one who is celibate to the point of castration. We don't talk about that much in our own culture and that was a really important message and many, many Christians were celibate."
On polygamy- "In Genesis, for example, polygamy was considered normal and it's what men did. You may remember some of the patriarchs had multiple wives and slave wives. The 12 sons of Jacob are fathered by multiple wives and concubines. In a subsistence economy, where people are subsistence farmers, the more wives and children one has, the more prosperous one is. And that seems to be how Genesis approaches the issue. So Jacob is a very wealthy man. He has many wives and children."
On the Song of Solomon- "It's an erotic love poem that was written some time during the monarchy in Israel and it imitates some of the other Egyptian and Mesopotamian love poetry from the time. It's quite erotic in its content. The way it gets read today is usually as an erotic poem. So it's often read quite literally as a description of sexual desire and sexual consummation. Interestingly, it wasn't read that way by rabbis and by the early Christians. They read it instead as an allegory or metaphor of the relationship of the soul to God — or the synagogue to God. So then, the description, for example, of the woman longing after her love becomes a description of the soul longing after God. The description of the man seeking out his lover in gardens becomes God seeking out the church in gardens and longing to be with the church and in a partnership in the church."  Complete article.

What does it mean to be a manhattan locksmith , NYC? In our humble opinion it means quality of service and being available 24 hours a day 7 days a week. Feel Free Contact Here: “www.aaalocksmithnyc.com”

What is Price to Book Ratio said...

This article has some great and useful information about this subject. Thank you for sharing it in an easy to read and understandable format.

But he has been busy, renewing the contract with respected legislative whiz Alice Kessler, with whom he has an existing friendship. keeps up the good! It is worthy of my learning, which provides a good reference for my own published blog,

I don't think any of that information would be new to anyone who has read the Bible. When we look at texts in the Bible, we should always remember that the knowledge in them is there for our benefit and use it accordingly. I find people are too quick to dismiss things instead of looking at what the passages are really saying and how the information can benefit their lives.

Song of songs speaks to the heart

It's an example people can relate to.