Irminsul, the Externsteine Relief (above) and Wikipedia's list of early 'sacred' poles- Asherah, Yggdrasil, Maypole, Palmette, Celtic Cross, Roland, Sacred Groves, Sacred tree at Uppsala and the Thor's Oak.
A pattern emerges. The Externsteine Relief is said to show the defeated Irminsul palmette on the lower right corner being replaced by the victorious Christian version of  a nearly identical symbol - rebranding and re-rebranding - usually without acknowledgement of the copyright infringment.  But here is an actual snapshot of the branding switch - with Christ just being removed. The victors must assume (this assumes assuming victors) that the gap between the two versions will be bridged by the sheer dumbness on the part of the vanquished or some psychic "persistence of vision" of Jung's Archtypes across the brains of the trampled populace. Compare earlier post - Swiss Pissing Contest - your steeple is bad and my steeple, good, better, best.  Click to enlarge images below. 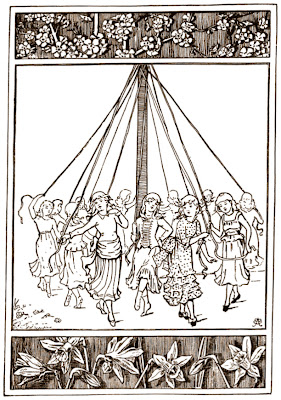 "The Maypole, to which we have already referred as formerly standing on the site of the church of St. Mary-le-Strand, was called by the Puritans one of the "last remnants of vile heathenism, round which people in holiday times used to dance, quite ignorant of its original intent and meaning." Each May morning, as our readers are doubtless aware, it was customary to deck these poles with wreaths of flowers, round which the people danced pretty nearly the whole day. A severe blow was given to these merry-makings by the Puritans, and in 1644 a Parliamentary ordinance swept them all away, including this very famous one, which, according to old Stow, stood 100 feet high. On the Restoration, however, a new and loftier one was set up amid much ceremony and rejoicing. From a tract printed at the time, entitled "The Citie's Loyaltie Displayed," we learn that this Maypole was 134 feet high, and was erected upon the cost of the parishioners there adjacent, and the gracious consent of his sacred Majesty, with the illustrious Prince the Duke of York. "This tree was a most choice and remarkable piece; 'twas made below bridge and brought in two parts up to Scotland Yard, near the king's palace, and from thence it was conveyed, April 14, 1661, to the Strand, to be erected. It was brought with a streamer flourishing before it, drums beating all the way, and other sorts of musick. It was supposed to be so long that landsmen could not possibly raise it. Prince James, Duke of York, Lord High Admiral of England, commanded twelve seamen off aboard ship to come and officiate the business; whereupon they came, and brought their cables, pullies, and other tackling, and six great anchors. After these were brought three crowns, borne by three men bareheaded, and a streamer displaying all the way before them, drums beating and other musick playing, numerous multitudes of people thronging the streets, with great shouts and acclamations, all day long. The Maypole then being joined together and looped about with bands of iron, the crown and cane, with the king's arms richly gilded, was placed on the head of it; a large hoop, like a balcony, was about the middle of it. Then, amid sounds of trumpets and drums, and loud cheerings, and the shouts of the people, the Maypole, 'far more glorious, bigger, and higher than ever any one that stood before it,' was raised upright, which highly did please the Merrie Monarch and the illustrious Prince, Duke of York; and the little children did much rejoice, and ancient people did clap their hands, saying golden days began to appear." A party of morris-dancers now came forward, "finely decked with purple scarfs, in their half-shirts, with a tabor and a pipe, the ancient music, and danced round about the Maypole."


Posted by Gary Regester No comments: