Take the 15 question Pew Forum on Religion & Public Life's Religious Knowledge Test , learn who in the US knows what about religion and check out the actual test here.
Posted by Gary Regester No comments: 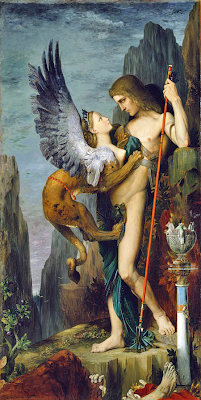 "A favorite topic with me was the popular belief in omens - a belief which, at this one epoch of my life, I was almost seriously disposed to defend. On this subject we had long and animated discussions - [my relative] maintaining the utter groundlessness of faith in such matters, - I contending that a popular sentiment arising with absolute spontaneity- that is to say, without apparent traces of suggestion - had in itself the unmistakable elements of truth, and was entitled to as much respect as that intuition which is the idiosyncrasy of the individual man of genius." --Edgar Allan Poe "The Sphinx" 1850 - click on link for entire spidery piece. 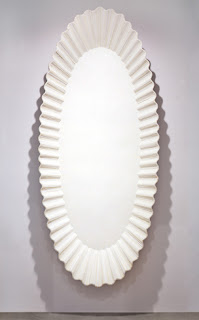 Jeff Colson's "Shrine" fiberglass, steel, and acrylic 12 ft (H) x 62" (W) x 12" (D) Ace Gallery, Los Angeles from October 23 through December 2010.  Is Jeff's "Shrine" the Zen form/nonform of Nuestra Señora de Guadalupe?  Ref: earlier Nuestra Señora post.  From Jeff's gallery's press release-
"At the core of Colson􀀁s work is a witty sense of humor and an awareness that artistic inspiration can be found in many unlikely places. For example, a large sculpture that the artist refers to as a 'hot dog boat,' was in fact based on a vision of the Virgin Mary that he had while driving. The sculpture resembles that of a halo outline, yet does not reflect the artist􀀁s thoughts on religion, but rather it implies, according to Colson, 'a yearning quality that is earthbound and in reality will not fly.' Constructions of yearning, anticipation and the foreshadowing of impending demise dominate Colson􀀁s artworks making the viewer aware that although the pieces appear to be blank slates, they do in fact carry many potential messages." 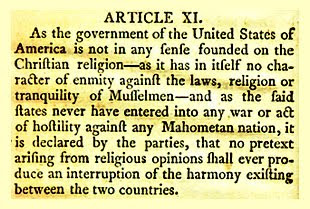 One of the most fallacious presuppositions of the not-so Christian "Christian Right" is that they want the United States to RETURN to the Christian principles on which it was founded. As our Fox News host Glen Beck said this past weekend, “Something that is beyond man is happening. . . America today begins to turn back to God.” Beck exhorted the crowd to "recognize your place to the creator. Realize that he is our king. He is the one who guides and directs our life and protects us." However, a moment of research (thanks to Google "founding fathers deist") into US history will show that this loaded statement is based on false assumptions. The men responsible for building the foundation of the United States had little use for Christianity, and many were strongly opposed to it. They were men of Europe's so-called Age of Enlightenment. Most were Deists, which is to say they thought the Cosmos had a Creator, but that s/he does not concern itself with the daily lives of humans, and does not directly communicate with humans, either by revelation or by sacred books. They spoke often of God but not the vengeful personal savior God(s) of the the Judeo-Christian Bible. In short, they were the same Humanists, the "holy right" now decry. They did not deny that there was a person called Jesus, and praised him for his benevolent teachings, but they flatly denied his divinity. When the "framers" wrote the US Constitution, they specified that "no religious test shall ever be required as a qualification to any office or public trust under the United States."(Article 6, section 3) This provision was radical in its day-- giving equal citizenship to believers and non-believers alike.  They wanted to ensure that no single religion could make the claim of being the official national religion, such as their former ruler, the British Empire. Nowhere in the Constitution does it mention religion, except in exclusionary terms. The words "Jesus Christ, Christianity, Bible, and God" are never mentioned in the Constitution-- not once. (Not to mention the First Amendment's no establishment clause, ratified in 1791.) Much of the paraphrase above from blogs "Founders Were Not Christians" which continues with a multitude of supporting quotations of the signers of the US Constitution and "The Christian Nation Myth".

Illustration above: Article 11, of the The Treaty of Tripoli reads "As the Government of the United States of America is not, in any sense, founded on the Christian religion; as it has in itself no character of enmity against the laws, religion, or tranquillity, of Mussulmen; and, as the said States never entered into any war, or act of hostility against any Mahometan nation, it is declared by the parties, that no pretext arising from religious opinions, shall ever produce an interruption of the harmony existing between the two countries." This Treaty written by Joel Barlow under the presidency of "founding father" George Washington, was then read aloud and unanimously approved by the Senate on June 10, 1797 under the presidency of "founding father" John Adams. The entire question is summed up by yet another "founding father" Thomas Jefferson who stated, as timely now as it was then, "There is not one redeeming feature in our superstition of Christianity. It has made one half the world, fools, and the other half, hypocrites" from Notes on the State of Virginia For more on John Barlow and Article 11, follow the link above   (at bottom of page) to further links to yet more articles/links.
Posted by Gary Regester No comments: