above, l-r: crystal quartz, natural Asherim, verdant springs, grantite pillars - at our 3800 meter elevation in the Colorado Rocky Mountains, it is too easy to question why other human beings continue to believe that God needs affordable Housing - more Temples, Churches, Qubbas - (more male womb/room envies??). But for the curious, Beth-El (House of "God") of Jacob/Israel fame, may not be exactly what you thought--

Who is "El"? From Encyclopædia Britannica, 2001- El (Semitic: "God"), the chief deity of the West Semites. In the ancient texts from Ras Shamra (ancient Ugarit) in Syria, El (El the Bull) was described as the titular head of the pantheon, husband of Asherah, and father of all the other gods (except for Baal). Although a venerable deity, he was not active in the myths, which primarily concerned his daughters and sons. He was usually visually portrayed as an old man with a long beard and, often, two wings. He was the equivalent of the Hurrian god Kumarbi and the Greek god Cronus. Writers of the [Hebrew Scriptures] used the word El both as a general term for "deity" and as a synonym for Yahweh.
© 1994-2001 Encyclopædia Britannica, Inc.
Posted by Gary Regester No comments:

Answering Dimitris - Why Phallos, no Vulva?

Last July, you asked me, "How come you've suddenly shifted from vulva to phallus?" And two weeks ago, you asked "I can't help but note that you've taken a much greater interest lately (as far as I get to see things) in the Linga and his various manifestations in and from around the world ... whereas I've met you - originally - you were much more a "yoni man". Or was I deceived into thinking so by my own One-Pointed Attention? Seriously. There seems to be shift there. I'd like to know if my perception is right or wrong - or gray."

Dimitris, let me suggest four answers. This serves as a useful cathartic exercise and your recent question comes at an expected moment - I have reached the classic 55 year old point of the householder who can now answer such questions "without care". One point of correction, I have indeed moved, but only from Yoni to Yoni w/Penis and THEIR manifestations - I have yet not moved quite so far as the "Linga and His various manifestations" - nor do I expect to - see Answer 3 below.

ANSWER 1] SPECTACLE! In response to your invitation to write an "short" essay regarding veneration of the Vulva for Demetra's book, one must immediately ask "why does anyone need explaination to venerate the Yoni/vulva which is everyone's arrival terminal?" then, restated "what blocks/blinds everyone from seeing the obvious?" And when we slowly scratch our way back through time to humankind's first images - why, indeed, it was the Vulva (see S. Giedion's Eternal Present, Vol 1, pg 173ff as an example).

[Now to answer your questions, it is useful to be living in the United States at the time of George W. Bush - same question "what prohibits everyone from seeing the obvious?"]

Why?? SPIN vs SILENCE The yX male (in his confused attempts against the obvious yoni double X chroma superiority) SPINS huge spectacle and false promise- sufficent to satisfy his fears some of the time, maybe most of the time. Women in general quietly dismiss men's spectacle out of hand, but say nothing very loudly (not always from any fear, as women have all the actual power and wisdom, but) because the one thing that having actual power and wisdom does (non-attachment) is begat SILENCE, or if not silence, at least not Spectacle. This, as example, is why it is impossible to write an essay on Yoni veneration without revealing one's maleness and male limits - only a man would use words to create a devotional to a bleeding baby hole.

Next, Woman may very likely also be silent regarding the male spectacle because women reasonably lack any first hand knowledge or appreciation of the two principal entangled fears and envies of the yX male from whence "arise" the motivation for his Spectacle and attempts at compensation-

a) envy of woman's blood magic (moon, menses, making babies)- hence male motifs, myth and mentality requiring blood "sacrifice" including war - a part of a male immortality construct. No woman I have met can believe Menses are a point of male envy, but history and the present male blood letting prove otherwise.

b) phallic magic or lack thereof (aka re-erection, resurrection, "who is controlling whom" and/or, more precisely, "is this erection, my very last erection?") A woman, might have a headache, but she is still physically always able to engage in sex and more importantly, to continue her arousal and have repeated orgasms. Men can neither quickly re-engage nor readily have multiple orgasms. (On this point, see Mark Twain's Letters from Earth, Letter 8.)

The "blood envy" construct, I have begun to understand and have been attempting for some time to discuss in my essay, however the latter - "limited phallic magic", I am only now "wrestling" with (55 years old!) - which would no doubt gave "rise" to your observation of my appearance of phallic fixation.


ANSWER 2] THE TEACHER Remember the ancient saying?? "When the student is ready, the Teacher will appear."?? Perhaps true. The discovery that the first icon was the Vulva and that every present day religion, if you but scratch off about 3000 years of history, was controlled by women, not by men - was, for me - shattering. Yes, a "yoni man"! But at the moment, I am coming, Teacher, upon the motif named "phallos wrapped". Certainly my wanderings since my fortunate trip to Patmos have turned up keyhole after keyhole, motif after motif - each which has expanded into a universe after universe of both knowledge and has revealed earlier misinformation. Perhaps this "rabbit holes" of a Path is itself the expected Teacher? (You have certainly been the Bodhisattva to me - calling from the far shore.) But I carry heavy right-wing fundamentalist baggage, acquired before the age of ten (my sister says "before eight years old") which I cannot exhaust in the remainder of this natural life. You, Dimitris, I think, do not have such baggage - that is, your lightness is your advantage. As I identify each item of baggage, I must ask "what is it?", "where did it come aboard?", "where did/does it fit in the mix?, why should I mend it or toss it?" - BEFORE I can move on. This is an exercise of the FISH attempting to unlearn/describe WATER. A short list of the larger pieces of misguided fundamentalist baggage would be:

One Way - Univocation (ie, My Way or the Highway)
Servants of God (ie, the Almighty needs Your help)
Chosen People (ie, you are the OTHER, so I now I can kill you)
Holy Writ "People of the Book" (ie, Holy Words save you for all Eternity, words are NOT proscibed "images" Ex. 20.4ff)
No history, nor human culture (ie, we be leav'ng fo' heaven any day now!)
Linear time and progressive knowing (ie, Christians know more about God than Jews, Protestants more than Catholics, and I know more than you)
God gives Money to the Holy Ones (ie, the poor are sinners)
AND MORE - stay tune in this space - but said much better than I - Chris Floyd's recent article.

ANSWER 3] ÉGALITÉ! The very very few women who have be kind enough to wade into my tirade - "Cantos Cunnus" - have commented that woman give men/phallos much more credit than do I. And that a truely oppressive Matriachy/Yoni could never exist (except among the leather ladies of your homeland), because if men were to relax their Patriarchy / Phallos, things would only come up to EQUAL - ie, women are not so stupid as to create the opposite of a Patriarchy. This is an opinion expressed by the authors in a number of books by women as well as Leonard Schlain' several tomes. This being the case, one could only move from Yoni to Yoni Around Phallos as a move towards balance - "Penis only" would be a step too far.

ANSWER 4] NO LOCAL YONI You may be correct that I have edged towards the Phallos even if wrapped in virtual vulva - but this past year or more your Yoni acolyte has not had the stablising influence of a willing point of devotion. Again, when the Teacher appears and when She disappears - this too is the Path.

Who is Asher'ah? Part Two: The Object 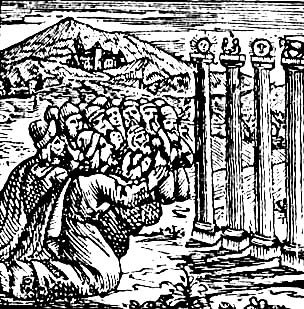 Fanciful woodcut above shows Hebrews worshipping the Sun, Moon and stars atop four aniconic Asherim. This blog will sooner or later get to a more probable iteration.

The word Asherah (Ashera, Asherim [plural]) in the [Hebrew Scripture] was used not only in reference to the goddess herself but also to indicate a wooden cult object associated with her worship. Prior to the conquest of Canaan (Palestine) by the Israelites in the 12th-11th century BC, the high places (Hebrew BAMAH, OR BAMA, Israelite or Canaanite open-air shrine usually erected on an elevated site) served as shrines of the Canaanite fertility deities, the Baals (Lords) and the Asherot (Semitic goddesses). In addition to an altar, matztzevot (stone pillars representing the presence of the divine) and asherim (upright wooden poles symbolizing the female deities) often were erected on the high places, which sometimes were located under a tree or grove of trees.

Because the Israelites had associated the divine presence with elevated places (e.g., Mount Sinai), they used Canaanite high places to worship their own God, Yahweh. Canaanite agricultural fertility rites and practices were adopted by the previously nomadic Israelites, often in a syncretic fashion with Yahweh replacing Baal. A strong reaction to the adoption of such rites led to protests by Israelite judges and prophets from the 12th to the late 7th century BC, when the Deuteronomic Reform of 621 bce led to the extirpation of the many local high places which included stone pillars, wooden Asherim and altars as sites of worship.
© 1994-2001 Encyclopædia Britannica, Inc.

from Edward Carpenter, 1914: As to the Asherah, or sometimes plural Asherim, translated "grove,"--for which the women wove hangings--the most generally accepted opinion is that it was a wooden post or tree stripped of its branches and planted in the ground beside an altar, whether of Jehovah or other gods. Several biblical passages, like Jeremiah ii. 27, suggest that it was an emblem of Baal or of the male organ, and others (e.g., Judges ii. 13, and iii. 7) connect it with Ashtoreth, the female partner of Baal; while the weaving of hangings or garments for the "grove" suggests the combination of female with male in one effigy. At any rate we may conclude pretty safely that the thing or things had a strongly sexual signification.

And BEST article in the internet on Asher'ah and Her connections is Asphodel Long's "Asherah, the Tree of Life and the Menorah : Continuity of a Goddess symbol in Judaism?" presented in 1996 at the College of St. Mark & St. John, Plymouth, UK [w/ excellent bibliography!) I would only add to Ms. Long's connections the Priestly redactor's concerns re: Aaron's blooming Rod and other "power" staffs which populate the Hebrew Scripture.