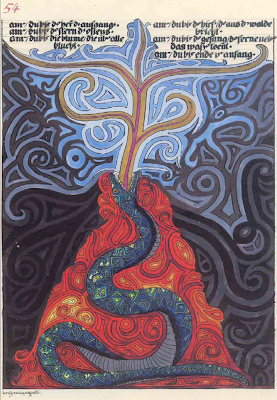 From the Philemon Foundation - "During WWI, Jung commenced an extended self-exploration that he called his “confrontation with the unconscious.” During this period, he developed his principal theories of the collective unconscious, the archetypes, psychological types and the process of individuation, and transformed psychotherapy from a practice concerned with the treatment of pathology into a means for reconnection with the soul and the recovery of meaning in life. At the heart of this endeavor was his legendary Red Book, a large, leather bound, illuminated volume that he created between 1914 and 1930, and which contained the nucleus of his later works. While Jung considered the Red Book, or Liber Novus (New Book) to be the central work in his oeuvre, it has remained unpublished till this day, and unavailable for study and unseen by the public at large. The work can be best described as a work of psychology in a literary and prophetic form. It is possibly the most influential unpublished work in the history of psychology. Its publication is a watershed that inaugurates a new era in the understanding of Jung’s life and work.

"The years … when I pursued the inner images were the most important time of my life. Everything else is to be derived from this. It began at that time, and the later details hardly matter anymore. My entire life consisted in elaborating what had burst forth from the unconscious and flooded me like an enigmatic stream and threatened to break me. That was the stuff and material for more than only one life.
"Everything later was merely the outer classification, the scientific elaboration, and the integration into life. But the numinous beginning, which contained everything, was then.”
— C. G. Jung
YouTube video by Digital Fusion, Los Angeles

Publishers' notes on the Red Book.

PUBLICATION DATE OCTOBER 7, 2009
The Red Book: Liber Novus
C. G. Jung
Edited and Introduced by Sonu Shamdasani
Translated by Mark Kyburz, John Peck and Sonu Shamdasani
With a forward by Ulrich Hoerni
The folio size (11.57 inches by 15.35 inches) volume consists of 205 pages of text in Jung’s masterful calligraphic hand and, from his skilled brush, stunning paintings. Of them, 53 pages are full images, 71 pages contain both text and 81 images and pages are pure calligraphic text.  Preview how the book was produced at: DigitalFusion LA Captures History for Carl Jung’s Red Book and the larger YouTube version.

"In fact, reading “The Red Book” is like visiting a foreign place of worship. To understand Jung’s text — to meet and listen to the creatures of his unconscious — requires solitude, silence, concentrated effort. At the beginning of the book (which is divided into “Liber Primus,” “Liber Secundus” and “Scrutinies”), Jung rediscovers his soul, alienated while he “had served the spirit of the time.” With it, he embarks on a series of adventures and meets, among others, Elijah, Salome, a serpent and the Devil. The narrative proceeds like a blend of biblical prophecy and dialectic, in places unexpectedly funny, as when, in “The Castle in the Forest,” he encounters a woman from the kind of novels he had “spat on long ago.” “I am truly in Hell,” Jung remarks, “the worst awakening after death, to be resurrected in a lending library!” But the conventional heroine who fills Jung with disgust has something to teach him: what he considers “banal and hackneyed contains the wisdom” he seeks. The heroine trapped in a castle in a forest is an archetype — one that, in this instance, challenges his intellectual snobbery.

"“Individuation” is the word Jung used for the integration of conscious and unconscious required for a person to reach psychological wholeness, an evolved state of being he did not consider within the reach of every person. Rather than breaking with convention, the “insufficiently creative,” as Shamdasani calls them, should remain within the “collective conformity” of society, which encourages us to assume that all cosmologies, all myths and religions, lie without rather than within ourselves. But, as Jung argued, the collective unconscious, even deeper than the personal, is a realm into which we can travel to discover all we contain, making the beauty, terrors and wisdom of the unconscious available to consciousness."
Posted by Gary Regester