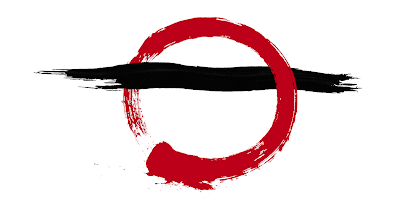 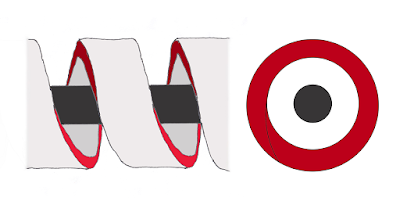 "To the primitive, all straight lines signify the membrum virile, the phallus; whatever is circular or sickle-shaped is the membrum muliebre, the vagina.  However unlikely this statement may appear, it is our only way of gaining insight into primitive thought; indeed into the basic meaning of the whole spiritual culture, their legends, songs, cults, arts, and magic." citation: J. Winthuis' Das Zweigeschlechterwesen bei den Zentralaustraliern and anderen Völkern, Leipzig (1928), page 12.

Though we would expand on J. Winthuis' "lines" - to include posts, poles and every pointing is a Penis ["thumbs up", especially, counts];  that every point (dot, spot, star, bindi) is a Penis.  And on J. Winthuis'  "circular or sickle-shaped" - that every encircling wrapping, binding and shroud is a Vulva; and every wrap (strap, strip, scroll, rope and ribbon) is a Vulva.  [including their alphabetic shapes, of course: the downward "P" and the double entendre "V"]

To this we would remind the modern - "the unconscious sees a penis in every convex object and a vagina or anus in every concave one." [Oxford University Press, Companion to the Body "Genital Symbolism"]

from S. Giedion, The Eternal Present, Bollingen, Random House, 1962, pages 226, 227, 230 - "Although [prehistory's] symbols of the sex organs are wide spread and easily recognizable, the symbol for continuing procreation, for the two-in-one. . .is wrapped in obscurity." "The symbol of the two-in-one can be expressed by a conjunction of male and female symbols, even by a juxtaposition of the two symbols." "M. C. Burkett, for instance, shows a short series of representations of the human figure as developed in eastern Spanish [rock] art which become similar to the letter of the Greek alphabet. But what do they actually mean? What is the meaning of the strongly defined circular form corssed by a vertical line which comes so close to the form of the letter ϕ?  Is it really only an abstract human figure? Can it not just as well be [*a coital] symbol?  Other signs point to the possibility of this as the highest fertility symbol: generator of life, with life endowed." (Ed: *Giedion uses "androgynous" rather than "coital", but the current meaning of "androgyny" is not consistent with his conjunctive use of "generator of life".)

To the concept of this conjunction of male and female symbols, there is an indispensable correlate of a phenomena described by Rudulf Otto and Carl Jung refered to as "numinosum" - "a dynamic agency or effect not caused by an arbitrary act of will. On the contrary, it seizes and controls the human subject, who is always rather its victim than its creator.  The numinosum - whatever its cause may be - is an experience of the subject independent of his will." Carl Jung, Collected Works, Vol 11, Bollingen, Princeton University Press, 1958, page 6, [cf: Latin numen - divine command or a nod.]

More concerning this dynamic interactions of ancient archetypes, the collective unconscious and the unrational grip of numinosum in a subsequent post.  On this interaction, we can decode a great amount of human symbolization and such activities as religion, politics, language and writ.
Posted by Gary Regester

This means it's in the gamers best interest to play European roulette. In some casinos, you’ll be required to register for an account earlier than you can to|you probably can} play. New gamers will get to get pleasure from a beneficiant welcome bonus worth 350% as much 온라인카지노 as} $2,500 for Bitcoin deposits.