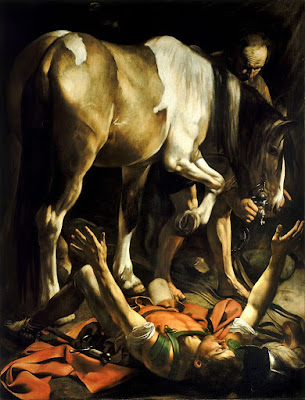 left: Caravaggio's "Conversion of Saint Paul on the Way to Damascus" c. 1600

Theologian Rudolph Otto coined the term "numinosum", adopted by Carl Jung, to refer to human experiences which produce a kind of holy terror, awe or dread.  Rudolph Otto described it as a feeling of the ‘mysterium tremendum' [awe-inspiring mystery].  Numen is a Latin word, deriving from the verb nuere, meaning “to nod.” In ancient practice, watching for the nod of a god (see links.)

We are, in this wandering, NOT particularly interested in the aspect of the numen and the numinous which are associated with awe, dread or holy terror as illustrated in Caravaggio's painting of St. Paul. Rather our interest regards its mundane and boring form where non-rational human ideas and behaviors are played out within everyday culture - blindly accepted without question - "something just right about it" - that may have as their obfuscated basis this numen factor described by both Jung and Otto.

For quick backgrounding, a review. Rudolph Otto bio.  Follows six "numen/numinosum" quotations selected from the recent book, The Quotable Jung, edited by Judith Harris, Princeton University Press 2015  and two links to further study on Jung and Rudolph's coinage of "numinosum" - from the Jungian Center in Newbury, Vermont and by Margo Mecks, Myth and More.

from Psychology and Religion (1938/l940), CW 11, p. 6 & p. 9.  "Religion, as the Latin word [religio] denotes, is a careful and scrupulous observation of what Rudolph Otto aptly termed the numi­nosum, that is, a dynamic agency or effect not caused by an arbi­trary act of will. On the contrary, it seizes and controls the human subject, who is always rather its victim than its creator. The numinosum, whatever its cause may be, is an experience of the subject independent of his will. At all events, religious teaching as well as the consensus gentium [general consensus] always and everywhere explain this experience as being due to a cause external to the individual. The numinosum is either a quality belonging to a visible object or the influence of an invisible presence that causes a peculiar alteration of consciousness."

"I want to make clear that by the term "religion" I do not mean a creed. It is, however, true that every creed is originally based, on the one hand, upon the experience of the numinosum and, on the other hand, upon pistis, that is to say, trust or loyalty, faith and confidence in a certain experience of a numinous nature and in the change of consciousness that ensues. The conversion of Paul is a striking example of this. We might say, then, that the term religion designates the attitude peculiar to a consciousness which has been changed by experience of the numinosum.

from letter to Gunther Wittwer, 10 October 1959, Letters, Vol. 11, p. 517.  "I profess no 'belief.'  I know that there are experiences one must pay "religious" attention to. There are many varieties of such experiences. At first glance the only thing they have in common is their numinosity, that is to say, their gripping emotionality. But on closer inspection one also discovers a common meaning.  The word religio comes from religere, according to the ancient view, and not from the patristic religare. The former means "to consider or observe carefully." This derivation gives religio the right empirical basis, namely, the religious conduct of life, as distinct from mere credulity and imitation, which are either religion at second hand or substitutes for religion."

from "On the Nature of the Psyche" (1947/1954), CW 8, § 383.  "Numinosity, however, is wholly outside conscious volition, for it transports the subject into the state of rapture, which is a state of willless surrender."

from Nietzsche's Zarathustra: Notes of the Seminar Given in 1934-1939, Vol. II (5 May 1937), p. 1038. "The idea of God originated with the experience of the numinosum. It was a psychical experience, with moments when man felt overcome. Rudolf Otto has designated this moment in his Psychology of Religion as the numinosum, which is derived from the Latin numen, meaning hint, or sign."